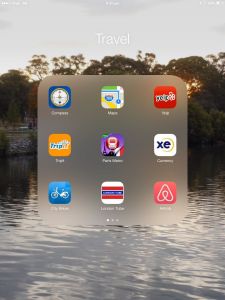 A few weeks of travel have shown up just what apps have been invaluable on the iPad mini.  Here’s a view of the ones that we have used extensively.

At top left, it may seem strange, but it’s been useful to have a compass within easy reach on many occasions.  In a city like London, Paris, New York or anywhere with a subway system, by the time you follow the twists and turns of the access to the platform and then exit the station it’s often hard to know which way you are facing when returning to street level. Couple this with the fact that the intuitive sense of direction which comes from generally having the sun to the North as it traverses the sky, at home in Australia, having it to the South in the Northern Hemisphere can play havoc with intuitive navigation.

The Maps app is essential, especially as it will geo-locate and enable searching etc. This one doesn’t have as many whistles and bells as Google Maps, but I find it has a smoother load time and doesn’t hang as much.

Yelp has proved invaluable on many occasions when you need, for example, to find ‘great coffee’ near current location. Once again, its map function is great for finding all kinds of stuff.

On the second row, Tripit has been fabulous for saving all booking confirmations and keeping our itinerary in order.  It’s also good for adding planned activities and a host of other benefits. Being able to email plans to [email protected] and also having the inbox scan function enabled makes planning much easier.

The colourful app in the middle is a Paris Metro app which has been great for navigating around the Metro system in Paris.  It also has a journey planner.

To its right is the XE currency conversion app which helps the decision about whether something is cheap or expensive when you want to go a bit more specific then the ‘rule of thumb approaches to estimating the damage in AUD. It has a plethora of currencies available.

At bottom left, the City Bikes app is amazing.  In settings, it is possible to select any city in the world which has a bike share system like Barclays in London, or Velib in Paris, Toronto in Canada or even Melbourne and Brisbane.  A live map then shows where the docks are, and in real time how many bikes are available at that time and then also maps your own position.  This can save a lot of walking on busy days when there may be a number of docks with no bikes available, but another around the corner which has plenty.  It also shows how many vacant spaces are available to return a bike.  We can’t speak highly enough of the bike share systems and, in Paris in particular, people from all generations and walks of life can be seen out and about; women in high heels, men in suits and anything else.

The London Tube app also has bus routes as well as a trip planner. The buses are excellent when you prefer to be able to relate to the sights you are passing.  Coupled with an Oyster Card preloaded with 7 days credit or whatever, it’s then simply a matter of tapping on and off in the Tube and DLR and tapping on to buses. The population density means that services are extremely well patronised and frequent even quite late at night.

The last app is the AirBnB app which is especially good for messaging hosts when arranging check-ins.

There are probably many more but these have proven their worth time and again. Please don’t hesitate to ask for more info if that would help. Or, why not share what you have found to be a ‘must have.’

In Paris this week, these two ticketing systems have been a staple and allowed us to cover a huge amount of territory. 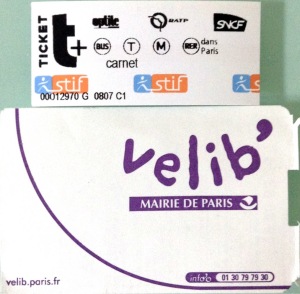 At the top is a single Metro ticket which is inserted at the barrier for a single journey. The most economical way to buy these is by asking at a ticket window for a ‘carnet.’  This provides you with 10 tickets for a total of around 13 euro.  Or, you can buy them with cash or card at a ticket machine.  Just look for the language selection option if necessary.

The ticket at the bottom is a 7 day access pass for the Velib bike system.  It provides you with an 8 digit unique number on the reverse of the card and, when buying for the first time at one of the hundreds of Velib stations around the city you will also need to allocate a 4 digit pin.  You’ll find that one of the options on screen is a Language option so that you can choose English if need be.  Once you’ve got your 7 day card then each time you want to get a bike it’s a matter of entering your numbers and then choosing a bike number to remove. If you dock the bike at any Velib station within 30 minutes there is no further charge.  From experience in London and Toronto this seems to be a common formula, with slightly different ways of operating.