The velib bike system in Paris seems to be a victim of its own popularity.  We’ve decided to cycle to a few destinations to get closer to Montmartre but find that all of the local velib stations either have no bikes available or only a couple of damaged ones. So, it’s down into the Metro again and a change of line before getting off the Metro at Anvers. 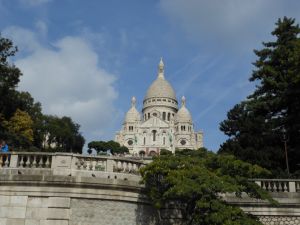 For the next number of hours, we climb all over Montmartre. It’s up  the stairs and past the touts to the Basilica de Sacre Couer, and its view across Paris.

We spend some time picking out the line of Rue Magenta and the probable run of the Canal Saint Martin.

Then, it’s a climb down more stairs on the Northern side of Sacre Couer to a cafe where Lynette tucks into an entree of escargots.

Through the twists and turns; up and down the slope, lies an atmosphere of creative endeavour.

It’s a good relaxed stop before we circumnavigate the hill itself, around to where the Moulin Rouge takes pride of place in what seems to be a bit of a tacky remnant of what must once have been.

We look up directions on the Maps on the iPad mini and begin the climb back toward the top to check out the Salvidor Dali exhibition before skirting the front of Montmartre and walking down the eastern side to catch a metro home from Chateau Rouge. With a change at Gare d’est we’re back ‘home’ at Jacque Bonsergent in no time.

Time to relax before we walk a few hundred metres to Auberge des Pyrenees Cevennes, one of Yelp’s top recommendations for a restaurant serving cassoulet, which turns out to be excellent.

So, not much of a bike ride, due to their popularity; but a very complete look at Montmatre and its maze of streets surrounding the central basilica which seems to stand guard on top of the hill.  Just around fifty metres to the West, a view opens up through the trees to the Eiffel Tower off in the distance.

One thought on “Monday Montmartre”