Our last day in Barcelona was frustrated by a torrential downpour, which pretty much kept us indoors. When it seemed to clear a little we headed off to visit the Picasso Museum, giving the Metro another go.  From Jaume I, a metro stop, it should have only been a few minutes’ walk to the Museum.  As the heavens opened again, we realised that every other tourist in Barcelona had also decided to visit the Picasso Museum, and the narrow street and alleys were teeming with bedraggled and wet people.We took the next best option and holed up in a nearby tapas bar, where we we’re lucky that our table wasn’t the one under the leak which developed in the roof! 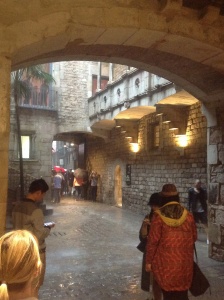 Eventually we decided one more attempt to reach the Museum was in order and we arrived there to find people packed in and sheltering from the rain, with a queue of at least an hour waiting in the rain.

In the end we had to admit defeat and rushed back to the Metro through a labyrinth of alley ways to find that the Metro station had closed our platform due to flooding, requiring us to travel in the opposite direction to be able to find a station at which we could change to our required line.

Back to the apartment to rest and then out to find a nearby restaurant which ended up being a great choice as we enjoyed some Catalan dishes and drinks before heading home to catch some sleep before an early morning start to get Courtney to the airport.

Our checkout went smoothly and it was off to Barcelona Sants to catch the AVE to Madrid.