For some reason, every time I think of Camden Town in London, I hear the lyrics from London Still, by The Waifs.

Last night, we headed over to Camden to have something to eat and catch some music. 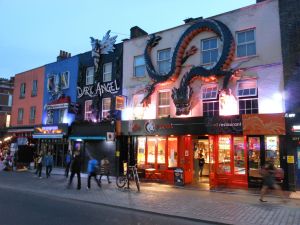 Even on a Monday night the streets were buzzing with life and we wandered up to Camden Lock and found the Ice Wharf where we grabbed a bite to eat.

The place looked lovely from the bridge over the lock, but they seem not to have their act together in the service department. Still, a nice place for a meal and a pint before crossing over the bridge to Dingwalls where a Monday Open Mic night is under way.

A guy who describes himself as a cockney from Hackney; son of a Scot and a mum from Mauritius decides to befriend us. He’s bemoaning the changes in the East End as the demographic changes and he exhorts us to get a train out to the East Coast for a ‘good old knees-up; ‘My Old Man’s a Dustman’ style. We might leave that for another time.

A wander down the street finds us at The Blues Kitchen where the barman wears a Cat Empire T-Shirt and the crowd just alighted from a tour bus compete with the piano player by seeing who can talk loudest.

We hurry back to the tube and, with only two choices of branch on the Northern Line manage to select the wrong option. A change at Euston fixes the problem and it’s home to Old Street.  Nice end to a good day.

One thought on “I took the tube over to Camden, To wander around”