We were up early to leave Paris on Friday.

Our airbnb host had booked a cab for us and it turned up on the dot of 6am to take us to Gare de Lyon to catch the TGV to Barcelona. 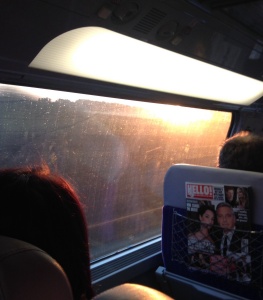 ite coffee all in French! ( well, whatever the Aussie accented version of French sounds like)

The train was amazing, reaching speeds well over 300 kph.  By the time the sun was up, we were well South of Paris and it made us realise yet again how effective something like this would be as an option in Australia.  The drawback would clearly be cost vs potential return within a less dense population, but it was a massive improvement on the crawl that we experience on the Newcastle – Sydney run.

It doesn’t seem to be long before we can see the Mediterranean out the left hand windows as the train turns Westward to run along the coast toward the border with Spain. Along the way we’re able to see some fabulous scenery and sometimes are able to grab some lovely shots like this one as we cruise through Bezieres.

So, with a travel time of around 6 and a half hours, we’ve made it to Barcelona Sants. Hola Barcelona!