It was interesting to travel between two countries in the EU and find that there were  no formal procedures to go through at all: no security scans or passport control. It was just a matter of lugging bags on board, finding our seats and enjoying the ride. On arrival at Barcelona Sants, once again, no procedures at all; just trundle our bags to the taxi rank and then off to our apartment for three nights in Calle Trafalgar, Urquinaona. This was a good location, with a Metro station at the corner and La Ramblas and the Place Catalunya a short walk away.

There’s a different feel to this city and we spend a bit  of time on the first night getting our bearings and trying some paella before settling in for the night, as we planned on being up early to watch the Swans take on Hawthorne in the AFL grand final at a bar not far away.

So, we are up early and off to the bar around seven to find that the bar wasn’t hosting the AFL broadcast this year.  A bit of quick googling and we’re in a cab to The Philharmonic: an Irish Pub offering Desayuna Inglesi; or English breakfast. We pass on the brekky, but are there to witness the sad fate of the Swans amongst a large,but very subdued crowd.

So, game over, up early and what to do?

After a quick breakfast at another cafe, we decide to really get our tourist thang on and buy day passes for the hop on/hop off bus, to get an overview of Barcelona.

After standing in a queue for quite some time, we ended up ‘hopping on’ but didn’t get round to ‘hopping off’ until the end. it was good to see some of the beach areas of Barcelona and to get a look at the infrastructure where combined light rail, cycle way and roads interact well.

The bus does the round of all of the attractions, all swarming with tourists making the most of the warm sunshine and Autumn weather. 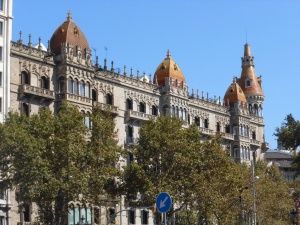 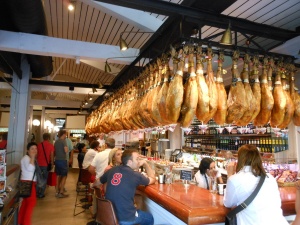 beautiful building here, and we get the chance to have a good look as we hop off near :the end of the loop and wander down one of the main streets taking in some of the architecture and the nice shops and cafés, before having some lunch at one of the many places that line the streets. We also take the chance to pick out a spot to return to for dinner on Saturday after Courtney flies in to join us. 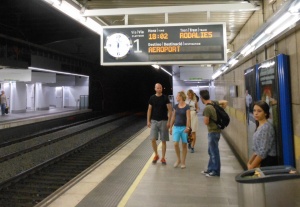 We download a Barcelona Metro app and set out to wrangle tickets from the ticket machine and get ourselves out to the airport via train to meet Courtney. After making a change from the Metro to the overground Renfe service, we arrive at the airport and are then whisked away on a shuttle bus for what seems like a tour of the immediate environs before getting to Terminal 2. 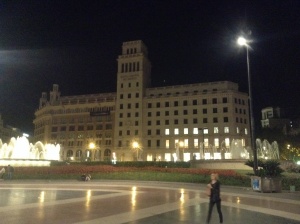 Then it’s back into town and out for some looking around and dinner. It’s a very lively place at night and the warm evening is nice for wandering about and soaking up the atmosphere before dinner at a spot we’d chosen before.

We’re all fairly worn out by now after some time travelling and a late dinner.  Time for some ZZZZZZs before seeing what Sunday brings.