Back in the early seventies the exaggerated stereotype of the Aussie abroad was often based on Earls Court, and achieved some comic notoriety with the release of ‘The Adventures of Barry Mackenzie.’

So, with random lyrics from the song rattling around in my head we found ourselves at Earls Court tube station before a brief wander up Earls Court Road.

“The adventures of Barry Mackenzie; dinky di tales of a true blue boy….”

A quick coffee and croissant and then onto the bikes to ride South down Earls Court road toward the Thames where we find that the tide is out and a row of houseboats lie at angles in the mud, waiting for the flood tide to refloat them.

Riding on along the Chelsea embankment there’s a great view across the river toward Battersea where more new housing developments are taking shape.  It’s a greyer day today but still much warmer than we would have anticipated.

A left turn takes us North again toward the Kings Road in Chelsea and we dock our trusty Boris bikes before a wander along the strip in Chelsea where a number of boutiques and quirky shops attract some attention. It’s clearly a different part of town as I pause to watch a chauffeur cruising by in a large black rolls, and London cabs spin on a sixpence to take a fare going in the opposite direction.

With a browse and purchase in Anthropologie completed it’s time for lunch and we ride up Sloane Avenue into South Kensington to find Jak’s cafe tucked away in a back street full of high end galleries and boutiques. 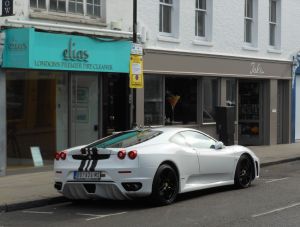 Just up the road, there’s a Dry Cleaner which obviously has some interesting stuff to clean judging by the car parked outside, and just across the street is a gallery with a fine message in the window for publicists everywhere. 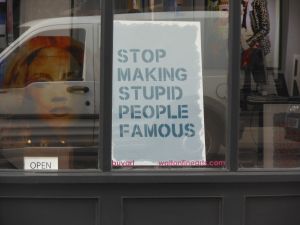 This is a lovely area for a walk around and we wander up toward the Victoria and Albert Museum to find a lovely Italian cafe for a coffee and cake stop before finding another bike rack and heading up to Hyde Park for a ride along the Serpentine.

A photo stop opposite the Royal Albert Hall provides the chance for a local to warn us of the perils of riding bikes on non-marked cycleways, so we keep an eye out for the places to ride as we roll down to Hyde Park Corner and the statue to the Duke of Wellington.  From here it’s an easy walk down Grosvenor Place to Victoria Station where we try unsuccessfully again to find a data SIM that will be workable for the rest of our trip.  The crowds are, by now, streaming in the opposite direction toward Victoria tube, so we repair to a pub for a rest and regroup before setting off on another bit of discovery.