Our Tuesday started out with a trip to the Apple store at Covent Garden to visit the genius bar and get a problem with Lynette’s phone sorted out so that it could use the international travel SIM which we’d purchased before leaving Australia. The nano SIM in my iPad mini has worked a treat and it’s invaluable for keeping a check on location, planning tube and transport routes, locating bike racks and just about anything else imaginable. We then spent a bit of time wandering around the markets and surrounding streets along with a short excursion up Regent Street, where Burberry was displaying some of the very latest shoes and fashion accessories.

Lunch consisted of some great pasta at Jamie Oliver’s Italian in Upper St Martins Lane, before retracing our steps to a store on Regent Street where I’d managed to lose my glasses which trying on a shirt! Luckily the glasses had been handed to the store security and I was very pleased to have my ‘eyes’ back again. 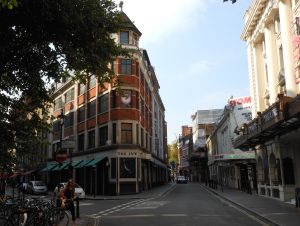 It was fun having a browse around the West End and we spotted The Ivy, where Adrian, our son in law, once worked.

The weather is remarkably warm and humid as we swelter in a packed train on the tube from Piccadilly Circus to St Pauls via Holborn before a walk over the Millennium Bridge to the Tate Modern. 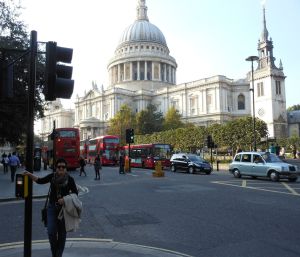 There’s a trick to cramming into the last bit of space on a tube carriage where, just as the doors close, it’s necessary to bend shoulders and head forward so that the doors can close.  It’s not a very pleasant way to travel and we’re glad to find a coffee and a chance to sit and regroup before posing for tourist snaps in front of the massive dome of St Pauls. 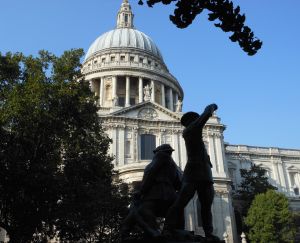 We pause for a while to check out a monument near St Pauls which is surrounded by wreaths. The monument maintains the gratitude to, and memory of, firefighters who were killed during the Blitz on London which commenced on September 7th 1940.

The human stories which emerge of the massive devastation in London during the Blitz and then in later attacks by the V1 and V2 rockets provoke reactions of horror which are almost unimaginable to us. While the people in London were being exhorted to ‘Keep calm and carry on,’ the faces on the street were strained from trauma, exhaustion and the denial of basic services for weeks on end. A first hand account from a man who experienced it all also adds a poignant reminder of that fact that around three and a half million children were evacuated from London in the first days of the war: mostly to destinations and people unknown by their mothers.

We walk on, down to the Thames and across the Millennium Bridge to the Tate Modern, rubbing shoulders with tourists and hearing the sounds of many different languages; including those of the protagonists from that time, almost 75 years ago, when terror was a constant companion.  Humanity seems to have a remarkable ability for forgiveness, which seems implausible given the atrocities we witness today in an era where those who suffered so much back then may have wished we could more sincerely embrace the notion of peace.

The Tate Modern galleries are almost dwarfed by the massive building in which they have been housed: a former oil fired power station which closed in the eighties.  The huge chimney stack is a stark reminder of its previous use.

It’s past beer o’clock by now so we have a brief drinks break at a bar overlooking the river and Blackfriars Bridge before walking back to St Pauls and climbing aboard a 76 bus back to Old Street: leg weary and sore footed.  Time for a rest before checking out some of our local options for dinner.

One of our AirBnB hosts had provided us with some local recommendations, so we head along Old Street Shoreditch to find Tramontana, in Curtain Street and a lovely dinner of Tapas, in readiness for our Spanish experience in another week and a half.

It’s great, after dinner to have a wander around the cobbled streets and see the buzz of an area where population density drives a vibrant night time economy in an area which has reinvented itself. All around London, signs of construction work add a sense that it is a city still very much on the move.

No more moving for us today.

Time for a rest in readiness for more adventures tomorrow!