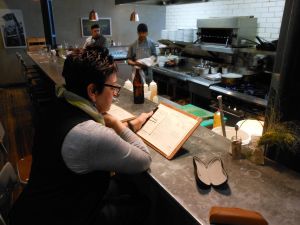 Aussies and Kiwis have clearly had some influence on the cafe scene in this part of London.  After checking out Lantana yesterday, we find ourselves just around the corner in Ozone, a coffee roasters and cafe which gives away the origin of one of its founders when the bill is presented with a tag which says simply: “Cheers Bro.”  We sit at the counter which encloses the kitchen and watch as our breakfast is prepared, planning the day and enjoying the lively feel.

Then, it’s back on the bikes for a better look around the Shoreditch area.

A few minutes of cycling and we find Jamie Oliver’s Fifteen restaurant tucked away in a backstreet just North of the Old Street roundabout.

Riding around this area, with its maze of streets running at all sorts of angles totally disorients my usual sense of direction and we find ourselves stopping frequently to check the little blue dot on the City Bikes app on the iPad mini and to look for the location of the next rack of bikes. 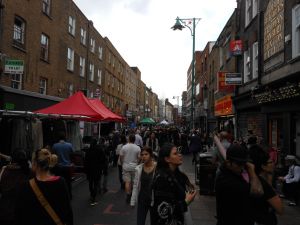 We find our way back to Shoreditch High Street and decide to wander down Brick Lane toward Whitechapel. The streets are full of market stalls with clothing, hats, vinyl records and food sellers from around the globe. It’s far too congested for riding, so we enjoy the walk, taking in the sounds and scenes; spending some time imagining just how some of the wonderful array of chocolates in this shop might taste.

As Brick Lane changes character to be a street of Indian Restaurants, we reach Whitechapel and on to Commercial Road for a quick catchup with the place I stayed when in London last year to speak at BETT.

There’s a rack of Boris bikes just here, and we take the opportunity to cycle down and join the Cycle Superhighway 3 which heads East toward Docklands.

The clearly marked cycleway parallels the Dockland Light Railway (DLR) past Shadwell and Limehouse Basin, where the Regents Canal links with the Thames, via a lock which dwarfs those further up the canal.

We cycle on and dock our bikes at Westferry, ready to catch the DLR down through Canary Wharf toward Greenwich. Canary Wharf, and the Isle of Dogs, which publicity describes as ‘From wasteland to towering success’  is symbolic of the moves, all around the world, where urban and maritime environments are evolving as different style of transport evolve, and previously busy, bustling docks become obsolete.  Adaptive re-use of this area has recognised the necessity for good transport links to complement the huge high density housing and commercial developments. 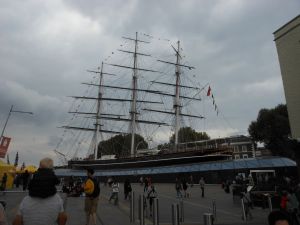 Our DLR carriages duck under the Thames to emerge at Cutty Sark, where we alight and wander past the huge Cutty Sark, one of the last great clipper ships which was built in the late 1860’s to carry tea to London, before setting records on the wool clipper run from Sydney to London.

Like so much, though, new technologies see the progressive obsolescence of past triumphs, as the development of the steamship and the opening of the Suez Canal make the past reliance on sailing ships a dying concern. Shift happens.

This part of Greenwich is a World Heritage area and we have a walk around the old Royal Naval College, with its magnificent Painted Hall which has seen a number of uses and was actually the venue for the initial dinner of the newly formed United Nations following World War 2.

Greenwich is also, of course, the site of the Royal Observatory and the Primer Meridian; with its key role in global navigation long before the advent of smartphones and GPS.

Seeing as we are at the place where Mean Time is set, it seems a shame not to stop for a short break at the Meantime Brewery to enjoy a pint of their London Pale Ale.

Then, it’s back under the river to check out the Naval College from the Northern bank.  The Queen at the time, living in the Queen’s House at Greenwich was apparently happy enough for them to build the College so long as they left a gap of 35 metres in the middle so that she wouldn’t lose her view of the river.  That’s the Queen’s House set back between the two towers of the Naval College.

There’s another rack of Boris bikes here, so we cycle back up through the Isle of Dogs, passing Mudchute and the London City Farm. Mudchute gets its name from its origin as a place where dredged mud from  the dock areas was dumped, creating open space. The entire area of former docks has now been transformed into a mix of high density housing, transport connections and commercial and recreational activities.

We catch the tube on the Jubilee Line northward to Canning Town where it intersects with the DLR before doing a quick return trip down to see Excel Exhibition Centre which is a massive venue built to house some indoor events for the London Olympics and now home to a number of large exhibitions and events throughout the year. It is now also the home of BETT which is held at the end of January each year.

Heading homeward, we catch the DLR back in to Tower Gateway and wander down toward the Tower of London in time to see a large crowd watching as cyclists circulate on the final stage of the Tour de Britain; 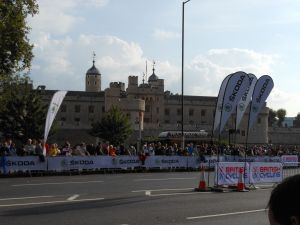 swooping carefully around this hairpin bend with the Tower of London and The Shard providing a backdrop of a thousand years of established difference. The riders lap past this turn around every ten minutes to the delighted cheers of the crowd, thoroughly enjoying the action in the warm autumn  sunshine.

We grab the tube one stop to Aldgate East and pick up our last bikes for the day before riding back up Brick Lane to Shoreditch High Street and then back to the rack in Leonard Street, just around the corner from our apartment.  Time for a rest before our attempt to catch a ‘Waterloo Sunset.’