The Spaniards now have one of the best high speed rail networks in the world and we got to enjoy an example of it travelling on the AVE train from Barcelona to Madrid. The boarding process was not unlike an airline boarding with checkin staff at the barrier to scan tickets and an air of pride in their presentation and manner.

I’d managed to get a special rate for “preferente” class so we found ourselves in nice sized seats, with plenty of legroom and a decent sized tray table. We also had power sockets for each seat. The only thing missing was onboard wifi. Luckily our 3G international SIMs were still doing a great job at roaming data and we stayed connected with

Movistar for 99% of the trip; a distance equal to Sydney to Coffs Harbour in 2 hours 45 mins.

The infrastructure cost must clearly be enormous, but the benefit in travel options and a reduction on the emissions from air traffic must also be a significant benefit. 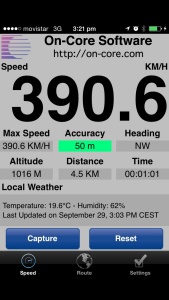 We were curious to see just what speed was being achieved and downloaded a GPS speed logger as we travelled. When we compare this to our train journeys in Australia it’s easy to see that our huge distances, low population density and cultural/aspirational obsession with the car has meant that we’re well behind the eight ball when it comes to even beginning to imagine the task of providing similar services.

I must admit to being sceptical about some of the travel times quoted for potential high speed rail from Sydney to Melbourne with stop at Canberra but can now see that a link from Newcastle to Sydney and on to Canberra could actually create a link which would bring these centres together and deliver the potential for a ‘do-able’ accelerator. Imagine a route more westward than the current line, with appropriate protections through the sandstone country; crossing the river near Wisemans Ferry and having a main Sydney stop at Parramatta with an interchange for city services.

Even if we are stuck with the times and line that we have, then let’s look at differential pricing and services. For a premium rate, if there were more work oriented seats, with tables and onboard wifi as well as coffee availability then there would be many business customers who would pay the premium. I know that this smacks of a return to ‘classes’, but realistically, we’ve been accepting first and business on air transport for years.

As we raced through the very dry looking Spanish countryside, I could only think how pleased I  was that we’d abandoned the idea of driving: especially when they served the three course meal and beer!

It didn’t seem long at all and we were pulling into Madrid and it was time to enjoy discovering another new city.