We flew into Heathrow from Abu Dhabi after a delayed flight and enjoyed the transfer to Paddington on the Heathrow Express.  As we needed to check in to our AirBnB apartment at Old Street we figured we’d grab a cab and all went well until we saw the Cash Only sign in the cab.  Having told the cabbie that we only had 20 GB pounds, he made it a challenge to get us there within the limit and, as the traffic snarled around Kings Cross station for some reason, it was an jinking journey through back streets and a run along Clerkenwell Road to our destination.  Check in went smoothly and we knew again that the value of booking an apartment vs a hotel is significant.

Wandering downstairs we found a pub about fifty metres away and had a ‘welcome to London’ pint and small shandy.  A leisurely walk around the immediate neighbourhood confirmed that we’ve found a nice edgy precinct to enjoy.

Arriving at night had the advantage that we could get a good night’s sleep and wake with body clocks in sync.  So, where better to head for breakfast than Lantana at Shoreditch, a cafe just down the street which was started by a couple of Aussies.  Eggs, sourdough and an understanding of what I was talking about when ordering a Long Black.

Suitably set up for the day, it was off to the nearest rack of Boris Bikes. We opt for the 7 day access and set off on our bikes to do some exploring.

OK, now, who knew that London, as well as all of the other things it has going for it, also has over 100 kilometres of canals; created to provide a means of transporting all sorts of goods within London, linking with the Thames and to major interior canals like the Grand Union.

Our apartment is close to the City Road Basin on the Regents Canal which runs from the Thames at Limehouse Basin up to Little Venice, at Maida Vale just near Paddington Station where the canal links with the Grand Union. 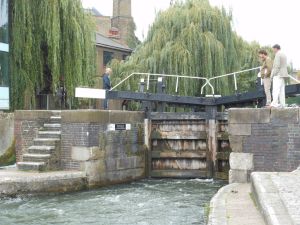 Our ride takes us past one of the many locks where the narrow boats and their crews work the large lock gates to drop around two metres in canal height. 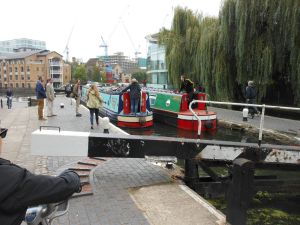 Using some basic hydrology and a significant amount of pushing of gates and winding of keys, the lock is traversed and the boats go on their way.

We watch, fascinated to see this aspect of transport history combining with a lively artery of walkers, runners and cyclists, utilising the legacy of a past which has long ago foregone its original intent.

We cycle on to Islington, the namesake of the suburb which is, for us, close to home in Newcastle. It seems a shame to miss the chance to enjoy a Pale Ale from the corner pub, as we check Yelp before heading off for a stroll up and down the Islington High Street which is full of nice food and fashion shops and a number of expectant groups; rose lapelled and ready for weddings at Islington Town Hall. We take the opportunity to have a browse around the Chapel Markets before picking up another couple of bikes.

We manage to find the canal again as it emerges from the tunnel and follow it on to Camden.  With some shakiness holding the Flip Camera while riding the bike at the same time, here’s a quick view of just how it looks riding along the Regents Canal Towpath.

Riding on to Camden Road, we needed to walk our bikes through the Camden Markets as the lovely autumn weather saw huge crowds of people wandering around the markets and finding the canal a lovely spot to overlook while lunching. The crowds make it impractical to keep following the canal, so we head off South down the edge of Regents Park and find a lovely pub, the Queen’s Head and Artichoke,  to enjoy some Tapas for lunch.  Haloumi with mint, Chorizo and Lentils and some great Pork and Paprika meatballs with a tomato based sauce washed down with a mid strength ale. So, onto new bikes from the rack outside the pub and I find that the Boris bike painted yellow is a tribute to the 2014 Tour de France which started in England.  This bike is about as close as I’ll ever get to the event itself!

We push on, down along Great Portland Street to Oxford Circus, before pedalling on to Marble Arch.  It’s amazing just how hot it is cycling on a day like today and we dock our bikes before strolling along the Northern edge of Hyde Park and picking up a couple of other bikes just near Lancaster Gate to check out the neighbourhood where Lynette lived for a while back in the seventies. Street after street of beautiful terraces provide a nice backdrop to a casual look around, stopping outside some places which have created memories. We muse about the fact that, back in the seventies, if someone had suggested that we’d be riding bikes around London in 2014 we would probably have been, at best, sceptical.  But, here we are!  A visit to the ticket window at Lancaster Gate tube station gets us organised with Oyster Cards and a seven day pass and we grab the Central Line tube East to Bank before changing to a big red London double decker bus for a short ride back to Old Street. Time for a chill out while planning a wander around Shoreditch in search of dinner and maybe some music.

Not a bad day really.