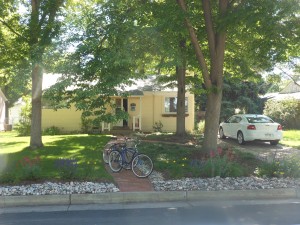 Our cute cottage for our Fort Collins stay

The morning was glorious today after apparently a long period of rain. We slept a bit late to make up for the zzzz’s lost somewhere above the Pacific and then readied our cruiser bikes for some cycling: firstly in search of coffee. 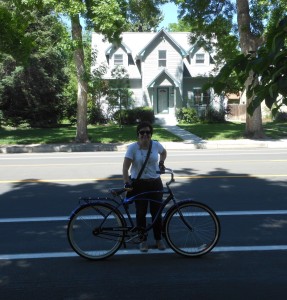 Lynette ready to roll on her blue cruiser

The bikes are fixed hub cruisers and, unfortunately, very difficult to ride after the riding position and gearing that we’ve become very used to.

We quickly discovered that being unable to correctly adjust seat height and getting used to back pedal gears made the whole exercise a bit of a non-event.

We managed to find a coffee shop which had been recommended and were able to get passable coffee; despite the US obsession with wanting to serve everything in huge cups.  Still, nice to find the Wild Boar, a very popular Fort Collins cafe with a steady stream of customers and plenty of people making good use of the free wifi. 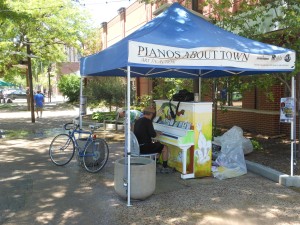 So, bikes returned to their tethering spot at home, we ventured out in the Dodge for a look around the Old Town.

Old Town is a good example of the way that cities internationally are creating aggragated precincts with bars, restaurants and all kinds of shops and boutiques. In a few spots, public pianos attracted players.

We found that, even here in Colorado there is still reference to Australian icons. 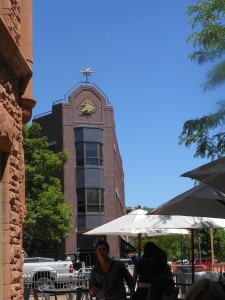 After a bit of wandering about we found The Kitchen, and a nice lunch, washed down with a good Rose and a Kolsch. (see the Untappd feed in the right sidebar for brew information.)

Sated, we set off to explore the surrounding area, with spectacular views across the nearby Horsetooth Reservoir.

From the Reservoir, we headed West up a winding road through hills which were devastated in the last few years with savage fires.  Eventually we were able to turn North East and follow the river as it rushed and tumbled back down through its gorge. 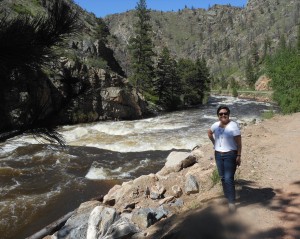 There was constant self talk needed after stopping to catch river views and returning to the fairly deserted road: “Drive on the right!” 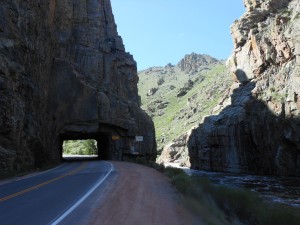 In one spot, the road tunnelled through part of the pass walls and we began to see kayakers and whitewater rafters bouncing and tossing downstream.

Emerging from the narrow valley, we turn back on to the State Highway North of Fort Collins and head back through town before chilling at home for a few blog and picture updates before wandering back to Old Town for a bit of fun.

Here’s a quick look at the river:

Upstream from Fort Collins 8 June 2015 from Roger Pryor on Vimeo.