Before heading to the US it seemed like a great idea to catch up with family and friends for some food, beer and conversation.

The Rocks Brewing Company’s brewery and bar in Alexandria turned out to be a good choice; tucked in between a gym and other businesses on Bourke Road Alexandria.  And, from there, a quick trip back to our airport hotel to get ready for the first leg across the Pacific.

Our flight made it out of Sydney on time at noon and we settled in for that long haul where there’s nothing more to do then wait it out; attempting to achieve a form of suspended animation.

We arrived at San Franscisco a little ahead of time, which was good, as we only had about ninety minutes to complete the transit to a flight to Denver.

The flight from San Franscisco to Denver was uneventful, with glimpses of the peaks of the Rockies glowing with snow as we made turns ready for an approach path over the plains into Denver International Airport and its underground train connecting all sets of terminal gates with the baggage carousels and main terminal.

A shuttle bus takes us to the huge rental car facility a few minutes away and we’re then into a Dodge Avenger and heading North toward Fort Collins. 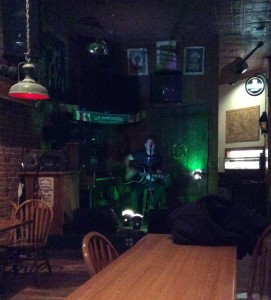 Fort Collins is home to Colorado State University and, amongst other things, has a few hundred miles of cycleways and an ‘Old Town’ core full of bars and restaurants which, even on a Sunday night, offer plenty of options for food and drink and, following our cab driver’s advice, after a few drinks and a meal at the Mainline we check out Lucky Joes to find an Open Mic night in full swing.

Despite a quick nap on arrival, we find that the jet lag is setting in and it’s home to crash.  We hope for nice weather on Monday to get out on the fixie cruisers which our AirBnB host has left out for us.

For this trip I’m using a widget which links directly to the Untappd database via API to display feeds of beer check-ins. You can keep up with it via the widget in the right sidebar.