Today we cycled to the station with the plan of visiting Den Haag; or as we’ve heard it for years: The Hague. A quick visit to the big yellow machine to top up the credit on the chip card and onto the train; an Intercity from Enkhuizen, taking us to Amsterdam Sloterdijk where we’ll change to a train to Den Haag. You need to have at least 20 Euros credit on your chip card before the barriers at a train station will let you enter. The amount is less for buses and trams.  As we only have “Anonymous” chip cards, we can’t set them up to auto top up like our Opal cards at homes. On arrival at Den Haag Centraal, we decide to take a tram toward some of the listed ‘sights’ and ‘sites’ to see.

Tap on; tap off and we’re near to a speciality coffee cafe where it’s possible to order a Long Black. Using the coffee stop to plot a path using Google Maps and we’re soon exploring the garden at the back of the working Royal Palace.

Onward again and we find ourselves outside what is listed as the most photographed site in The Hague: the Peace Palace.

This beautiful building houses a number of functions related to international Peace: the International Court of Justice and others. Near the gate, stones surrounding the grass bear the words for ‘Peace’ in languages from around the globe.

There is a fairytale view of the possibility of peace embodied in the gravitas of the building’s placement within its surrounding context.

A black car pulls up to the two orange traffic cones before the gates.  The security man uses a mirror on a small trolley to check the underside of the vehicle. Having passed the scrutiny, the vehicle enters the first of two gates that separate the passage from out there into here.

And, if here is Peace, then how do we get there?

Beyond a wry grin at the irony of the need to screen a vehicle heading into the Peace Palace, there is, nonetheless, a relevant question as to why it is so difficult to achieve what so many would say, as humans living in communities, that they would like: Peace.

As a teen in the sixties, so much of the music many of us listened to called for peace; for an end to aggression and for the recognition that, in the words of Bob Dylan’s 1964 hit, ‘The Times they are a’Changin.’

The Peace movement was not just about the Vietnam War and the use of the draft or conscription to provide soldiers to take part. It was a vision of hope; that by doing things differently we could create other possible futures. Hope that we could, instead of focus on difference, tap the deep well of commonality amongst humanity. Our archetypes live best in the context of the level of care and nurture for our young: in the general human predisposition to provide a better world. In an era of information availability, why can’t we use the human capacities we have to explore the abstract view: that of someone else. Empathy after all, costs little yet returns much.

Instead; today, the default is to a binary construct. We have leaders in prominent nations adopting a crash through strategy: you’re with me, or part of the *insert perjorative description here.* We see this aided by the rapid shifts that have taken place in the way that thoughts and ideas are quickly out there: disseminated into interconnected echo chambers of social media. Amplification of implication; trumpets for those bold enough to master the embouchure: influencers with panache or not.

Just what can we all agree is something to which we’d be willing to commit?

The simple piano notes created the palette, and the lyrics from John Lennon seemed to say it so well when he asked us to ‘Imagine’

No need for greed or hunger; and no religion too….

The Hague is certainly worth a visit if you happen to be in South Holland. 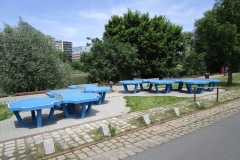 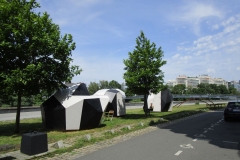 One thought on “The Peace Palace journey: Are we there yet?”