In the last week, as we’ve pedalled or walked along the harbour, we’ve seen comings and goings of a number of different boats and ships.  Canal and river cruisers, here from Cologne via inland waterways, tall ships with square and schooner rigs, traditional boats with heavy rigs and ‘ears’ that look like they can be lowered to increase the ability of the ship to hold against the wind’s efforts to knock sideways. That’s my theory anyways.

So much of meandering around Hoorn by bike or foot is like taking a step through the canvas into the bustle of the past; 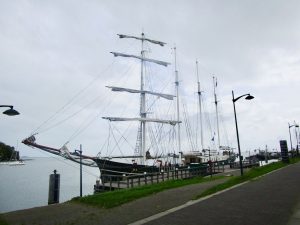 Today, the only four masted sailing ship in Holland was in port as we wandered along to see a great movie at the Cinema in the old gaol. The sleek looking ‘Summertime‘ lay alongside; having just tied up not long before we happened along.

That got us looking for information about arrivals and departures in the port of Hoorn. A quick Google search and plenty of sites providing information about exactly which vessels are currently in the harbour; time of arrival etc. There’s just so much accurate information available to us at the tap on a button or swipe of the finger; our fingers, or thumbs, typing at pace: accessing the information we seek.

Over four hundred years ago, in 1612, Dutch sailor Willem Schouten named a cape on a stormy and wind beaten island at the extreme of an archipelago off the end of a continent, Kaap Hoorn, in memory of Hoorn, in Holland.  Despite the fact that the Cape is now recognised as Cape Horn, the recognition of the experience of having rounded the Horn under sail, with howling winds and icy rigging, is still kept alive with a society here in Hoorn.

From here, back then, ships set sail for distant shores; on the other side of the world.  Dutch ships of the East India Company sought immense wealth by sourcing and then trading in vast quantities of spices and goods from the area we now regard as Indonesia.  In the city square here in Hoorn, the statue of Jan Pieterszoon  Coen glowers out across the square. The building of empires, or trade monopolies, or strategic positioning saw some amazing feats of navigation which indicates the potential value of such risk taking.

And, to what extent was there a sense of simply wanting to ‘find out’ about something or somewhere new?

Why do we still launch expeditions out into the eternal space that surrounds us?

How can we reconcile the dissonance of the wonder at the sheer commitment to be willing to sail a wooden ship to the opposite side of the planet with the longer term consequences of the building of colonial empires with its inherent exploitation of resources and imbalance of benefit between colonialist and traditional owner or custodian?

Can we imagine the courage required to literally sail off the edge of the known world: to places where giant serpents be: or where ships founder not on rocks but on some tranquillisation of the will to sail onward?

Whatever the answers; the path to the sea is now closed; with great dykes and locks creating what is now an inland lake; where ships will no longer set sail from Hoorn to steer South into the Roaring Forties for a drive across the ocean and, sometimes, to brush up against the west coast of New Holland. As we walk home from the cinema we can feel that the sense of connection with the sea and the arts of sail is still rich within the houses that face the water.

Up there, a boat swings as the wind changes the angle of its approach. We wait for the wind to bring it abeam and snap away. A neighbour’s cat welcomes us home.

I’ll light the fire
You put the flowers in the vase that you bought today….. Graham Nash

One thought on “Stepping into a picture from the past”