The end of the week rolls around with the added double shot of being Friday 13th and also a full moon. We decide that access to decent coffee is a good start, so we call in to one of the cafes that we’ve found that serves good coffee.

The Het Koffie Lokaal serves a nice coffee indeed and also has some funky neighbours.  We’ve found that ordering a Cafe Americano usually delivers a Long Black, while Lattes, Flat Whites or Capuccinos come with a set formula for the number of shots etc.  This cafe does a nice Cortado with warm milk served on the side.

Now fortified, we ride our bikes on to the station and add them to the hundreds already parked there.  Trains run to Amsterdam Centraal every half hour at 10 past and 20 to the hour.  We’re getting used to the trip already. Off into Amsterdam to do some more discovery and then dinner and a band at Bitterzoet, a music venue not far from Centraal station.

We arrive at the station without incident and then find that our plan to rent OV Fiets (bikes) at the station is not going to work.  Most stations have the bikes available which can then be used to complete a trip, or attend an appointment; solving the problem of how to manage the last bit of a trip.  It turns out that these bikes are only available to those holding personal chip cards for the public transport system: cards that are available for residents only. So, it’s off to the other end  of the station to rent from MacBike, a very busy rental facility with a smooth operation to get us fitted with bikes and locks etc. We’ve decided to check out Noord this afternoon, just across the water from Amsterdam Centraal.  We ride our bikes directly onto the ferry which only take a few minutes to cross to the other side.  We are just two of many many cyclists waiting to get to the other side.

The ferry had separate entry paths for cyclists and another for pedestrians.  In situations like this it seems that the Dutch are very orderly, no rushing or pushing, yet an implied responsibility to be ready to move when it’s our turn, so as not to cause inconvenience for others.

Like so many former dockland areas in cites around the world, parts of this area are being redeveloped for housing and other buildings. 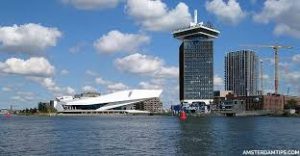 We pass the building with the revolving restaurant at its top and the white modernistic building of the  Amsterdam Eye which houses a film museum.

Riding further Northward, we can see the distant buildings of the former shipyard, the NDSM, where many shipyard buildings have been repurposed as cafes, bars, homes to startups, a base for Green peace and much more. 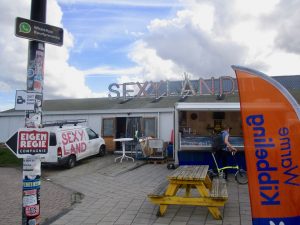 The area plays host to music and festivals as well as providing an excellent vision for how some former industrial areas can be utilised by a wide variety of users. 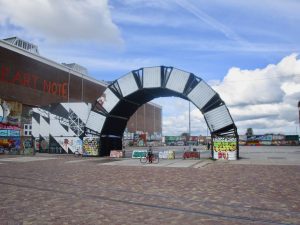 The scale of the old buildings is massive, with plenty of potential for a host of purposes.  It’s great to be able to pedal around having a good look at this very cool area. 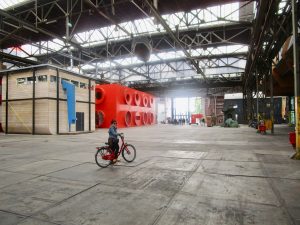 Inside the huge sheds, where former repairs and fabrications were made are open areas and enclosures that can be used for a range of purposes including a bar tucked into the corner The large crane that serviced the main building slipway still stands tall and proud beside the concrete slipway where men gather and share coffee and stories as they study the tourists who pass by; wide eyed and intent. We set off back toward the ferry, along one of the dedicated cycleways that make getting around by bike so easy.  The key to these cycleways is that they are separated from traffic and also dedicated to cycles alone, with an adjacent footpath for pedestrians.  We also learn to ride well to the right as many of the cyclists here, who have been riding since they could walk, will come gliding by at a much faster pace than us.  The cycleways are also used by small motor scooters and even some tiny cars.

We quickly reach the ferry and cross back to the city side of the water where a major cycleway runs East West providing a very pleasant ride along the waterfront, where sailing ship the Amsterdam returns to base after a lunch cruise and Maltese registered river cruisers lie alongside waiting to take modern day Viking cruisers along the canals and rivers deep into Europe. 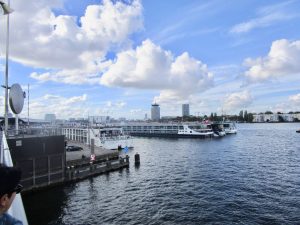 The cycleway traffic intensifies as we head toward the afternoon peak.  We return our MacBikes and wander off along the canals of the inner city, on the way to our dinner date at 5&33 and touring Aussie band The Rubens at Bitterzoet

Some great music; a few quiet drinks and then a train back to Hoorn and our bikes for a quick pedal back home.  A pretty good Friday really.

Saturday looks set to be a chilled day in Hoorn where many of the historic sites will be open as part of a monumental celebration.