We’ve been making lists of places to travel to and experience.  The other day, it was time to head to Utrecht, to the South East of Amsterdam.  Luckily, every half hour there is a train from Hoorn which travels through Amsterdam and Utrecht on its way further afield. So a pleasant one hour trip in a nice train is definitely the way to go. On arrival at Utrecht we were surprised to see that we’d alighted into a Centraal station which is very modern and surrounded by lots of new building work and an enormous shopping centre.

It took us a while to get through the shopping centre and find the old city centre where shoppers, locals and tourists wander through the streets. 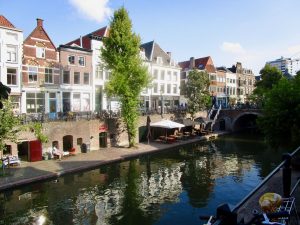 We find the main canal which is unusual in that it has two levels: a street level on each side and, down below, at canal side level, a whole series of other premises.

We’d seen a lot of videos previously of cycling in Utrecht and decided that we’d really enjoy getting some bike and trying it out for ourselves.

A quick google search and a bit of plotting a course to find a bike shop meant that we were soon set up with rental bikes. These cost 7.50 euros and the bikes were in great condition and had hand brakes rather that the older black bike ‘back pedal’ or ‘foot brake.’ 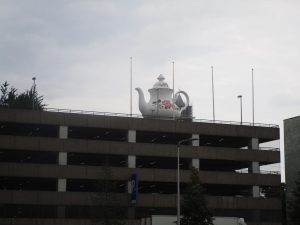 We set off and ended up taking a huge loop around the inner city, almost completely on cycle lanes and mixing with the hundreds of other cyclists that we travelled with along the way. We got to see a lot of inner Utrecht and were again amused at some of the quirkiness which just seems to bob up from time to time.

Right up there, on top of the shopping centre carpark, sits an eight metre high teapot. After a number of kilometres dicovering various parts of the city, we began the pedal back toward the station and the bike rental shop, joining growing numbers of other cyclists finishing work, or school, or university for the day and heading home.  Everybody stops and waits patiently at red lights and stays within the cycle lanes which quickly lead to where we need to go, along with a stream of hundreds of others.

It’s nearly time for a post about bikes in Holland. They are such a ubiquitous part of life here with many many benefits.